As we draw towards the Winter break, sports clubs at UK universities are turning up the heat!

From Championship events in Jiu-Jitsu and Taekwondo to UK university esports league action, students have been competing up and down the country across a variety of different sports.

Other highlights from the last seven days of UK university sport include the third Snowsports competition of the year, esports league action, and a magical result in the Scottish Cup which saw a UK university men’s football team advance into the fourth round of the competition for the first time in over 50 years.

With over 550 martial artists competing at the recent Jiu-Jitsu and Taekwondo Championships combined, popularity in the sport at the UK university level is clearly still growing.

Over the course of two days, Jiu-Jitsu athletes from various weight categories battled to become champion Atemi Champions. In the individual event, the University of Surrey’s Keshav Chudasama was crowned men’s individual champion after overcoming Luke Cleaver of the University of East Anglia in the final.

In Nottingham, the Taekwondo Autumn Championships showcased five different forms during the event. Changhon, Freestyle, ITF, WT and Kukkiwon patterns were on display as over 30 students were crowned gold medallists from 22 different UK universities.

There are four different types of Martial Arts available competitively at UK universities, with Judo and Karate joining the disciplines above. Each type has between one and three events over the university sports calendar year.

UK university snowsports teams tricked out at the third event of the season with the second of three Dome Series regional events!

Over 110 snowboarders and skiers traveled to Milton Keynes to take part in the Dome Series: North event. Following on the Midlands & South heat earlier in the month, students competed in the same five disciplines including Ski Race, Snowboard Race, Ski Duals, Snowboard Duals, and Freestyle.

Watch highlights of the event below.

In the Ski Freestyle event, Phoebe Hughes (University of Bristol) scored an overall of 83 to take home the Gold in the women’s competition, while Victor Wrottesley (University of Bath) showed off his skills to earn the men’s title with an overall score of 90.

Lastly, Lucy Mashford (University of Bristol) and James Purvis (University of Leeds) were victorious in the Snowboard Freestyle finals with overall scores of 55 and 65 respectively.

UK university Esports teams have been racking up points in the past week, with over 100 teams competing in a variety of video games.

The NUEL Esports league is the highest level of competition at the UK university level and plays host to over 100 university teams across eight different games.

Currently at the top of the table are the reigning champions, the University of Warwick. The leaderboard on the right shows how many total points the top 10 schools have collected so far across all eight competitive games.

In fact, the NUEL Winter Season is set to become even more competitive in the coming week as teams that have reached the play-off stage of the competition, battle it out for a place in the Finals Week that is less than two weeks away! 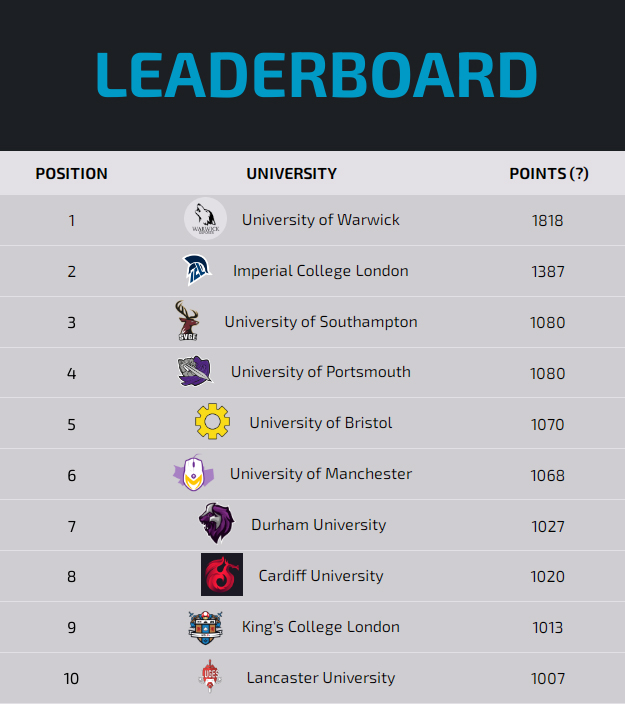 The University of Stirling men’s football team has made history by becoming the first university side in over 50 years to reach the last 32 of the Scottish Cup.

A hard-fought 1-0 win against Scottish League Two, Albion Rovers side at the weekend saw Stirling book their place in the 4th Round for the first time in university history.

Midfielder Euan McGill scored the only goal of the tie in extra time to keep Stirlings Scottish Cup dream alive, as the team now prepares to face Dundee United of the Scottish Premiership in the next round.

The University side began their cup campaign back in September overcoming Lothian Thistle Hutchison Vale 3-0 in the first round and followed it up with a 3-1 victory in the Second Round against Dunbar United.

After victory at the weekend, Stirling have been rewarded with a huge draw as they will be taking on Scottish Premiership side, Dundee United at the end of January.

With a capacity of over 14,000 at Dundee’s Tannadice Park Stadium, the Scottish Cup is one of the many tournaments that provide students with the opportunity to experience playing their sport on a national level whilst studying at a UK university. 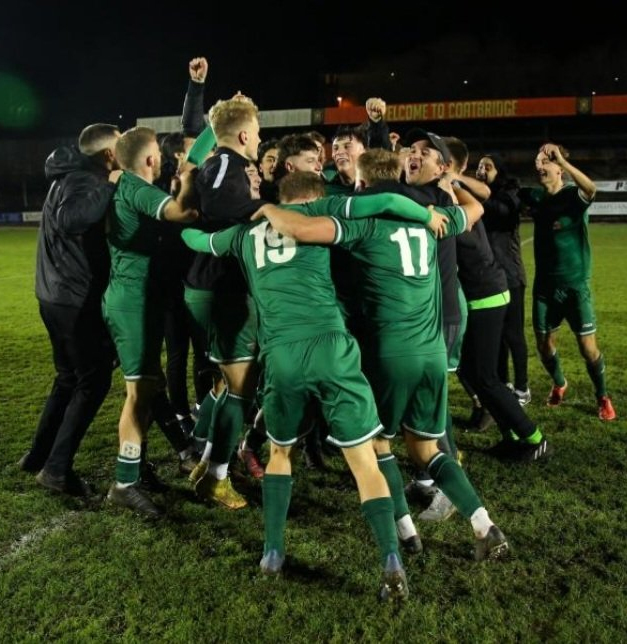