Ahead of the winter break, we reflect on the first half of the 2022/23 BUCS Super Rugby season.

Introduced in 2016, BUCS Super Rugby is the highest level of university rugby union in the U.K.

The BUCS Super Rugby League contains some of the most promising young rugby players in the country. Made up of the 10 best UK university teams, each team plays the other twice throughout the season in order to be crowned BUCS Super Rugby Champion.

Since its opening match on the 28th of September, the 2022/23 BUCS Super Rugby campaign has provided some unforgettable matches. From Nottingham’s maiden Super Rugby victory on the opening weekend to Hartpury’s 1-point win over rivals Exeter, this season is already shaping up to be one for the ages.

We look back on which teams have enjoyed success at the halfway stage, some memorable games, and a record-breaking season for one player in our mid-season recap.

Going into the Christmas break, it’s Loughborough University who are top of the league. With 7 wins in 11 games, Loughborough have been in fine form since their opening-day defeat to Durham.

The University of Exeter currently sit in third place, three points clear of Cardiff Met University in fourth. Completing the top five are three-time BUCS Super Rugby winners Hartpury University, who have a game in hand on the teams above. 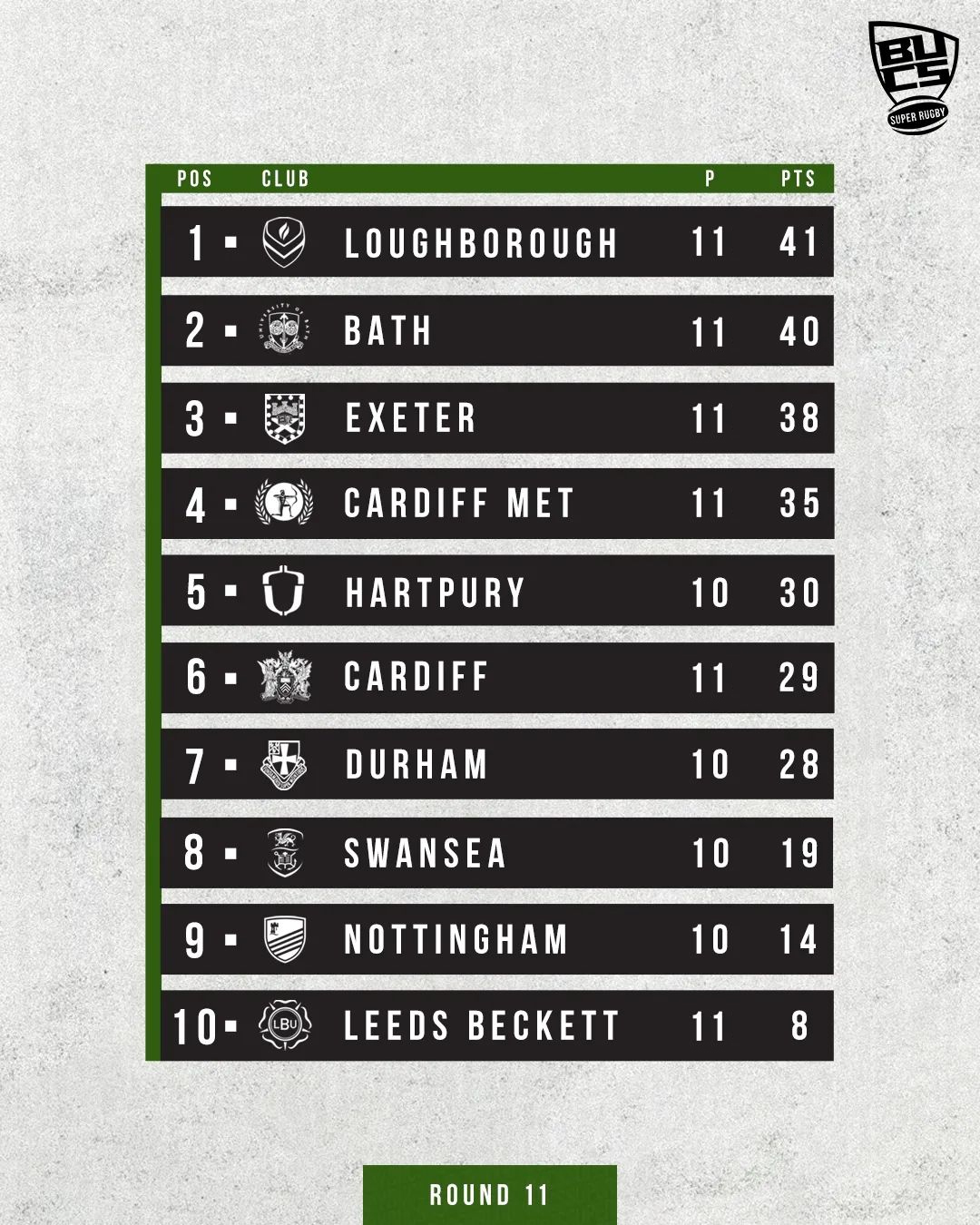 There have been some enthralling matches already this season, with close finishes and record-breaking performances.

Here are six games that have produced some unforgettable moments:

The “king of kicking” hit the record 314th point on the 16th of November in Cardiff Mets Round 7 fixture against Durham.

With seven games still remaining, the Archer’s kicker is looking to extend his all-time points total before the end of the season.

BUCS Super Rugby is an integral part of the university sports scene in the United Kingdom that has continued to thrive and grow. Last year alone, 25 players who competed in the 2021/22 BUCS Super Rugby campaign went on to sign professional contracts.

This was the highest number of players ever taken from universities in the UK in history. BUCS Super Rugby offers players the opportunity to find themselves on the radar of professional teams around the world and has even been praised by pundits and current players for its ability to launch aspiring players’ careers.

Learn more about UK university rugby via the link below.