We reflect on some of the Championship events which have taken place during the first term of the 2022/23 UK university sport season.

BUCS Championship events bring together talented athletes from different universities, providing a platform for them to showcase their skills and compete for national titles. Over the past few months, we have reported on some truly incredible UK university sporting events. From thrilling matches and nail-biting finishes to record-breaking performances and unforgettable moments, BUCS Championships never fail to deliver excitement and drama.

One of the standout events of the season was the BUCS Swimming Short Course Championships, which took place at the fantastic Ponds Forge facility in Sheffield. The Championships welcome the best university swimmers from across the UK every year. With multiple record-breaking performances, this year’s event was certainly one to remember. 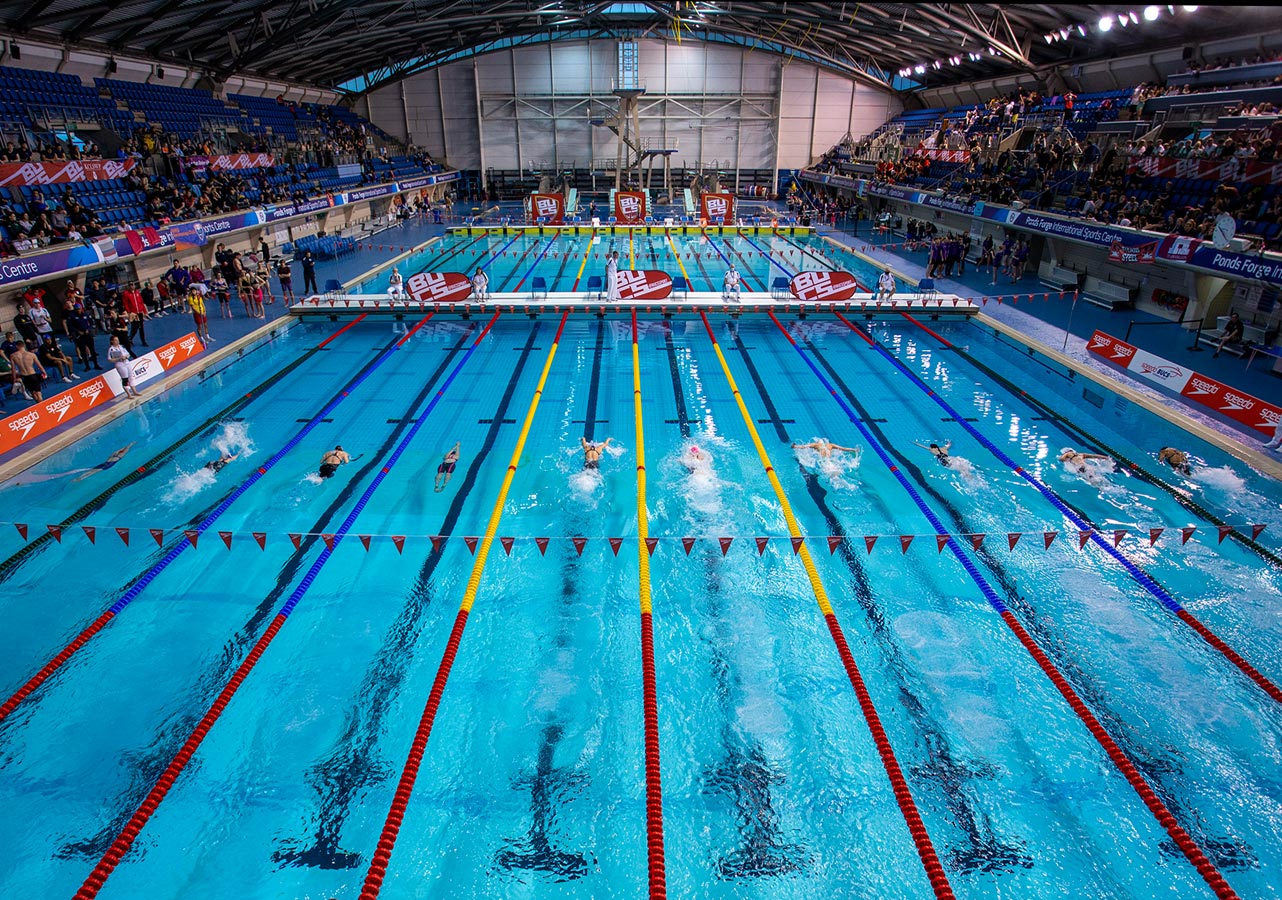 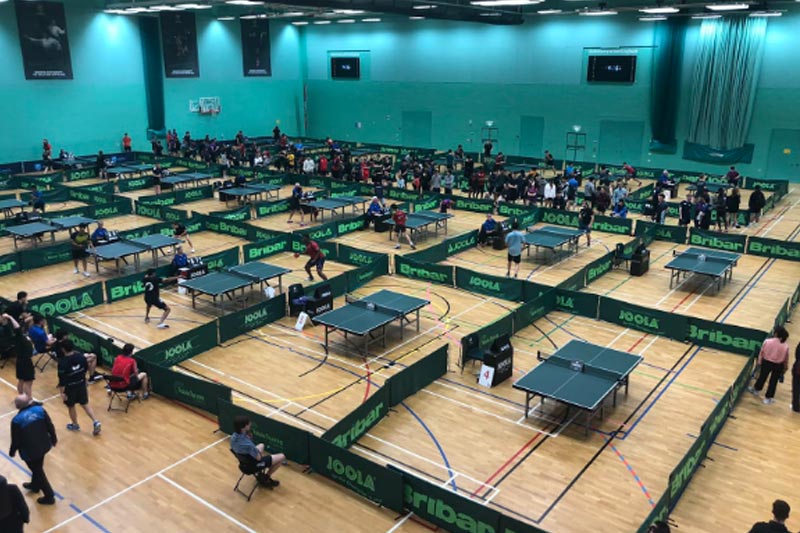 Another highlight of the university sports calendar were the BUCS Table Tennis Championships. With a record number of 380 students representing 52 universities from all over the UK, the event was a showcase of some of the best table tennis players in the country, and saw many incredible performances and exciting moments.

In addition to these large-scale events, there have also been a number of smaller, but no less important, competitions taking place at universities across the country. We look back on some of the UK university Championship events which have taken place so far.

The annual BUCS Surfing Championships were one of the first events on the 2022/23 UK university sport calendar. Almost 40 UK universities were represented at this year’s Championships, as over 350 students descended onto the beautiful sands of Fistral Beach in Newquay to surf for gold.

The championships were a showcase of the incredible talent of UK university surfers and set the stage for even more exciting competition in the future.

Check out some highlights from this year’s event on the BUCS Youtube channel here.

The BUCS Lacrosse 6s Championships took place in early October with 17 universities fielding teams in this year’s event. Hosted by Nottingham Trent University, men’s and women’s teams battled against each other for both Championship (top tier) and Trophy (lower tier) titles.

After a thrilling day of competition, the University of Nottingham (pictured) eventually claimed both men’s and women’s Championship titles with dominant displays throughout the tournament.

In the Trophy finals, the University of Cardiff picked up the men’s title, while Newcastle University claimed the women’s trophy. 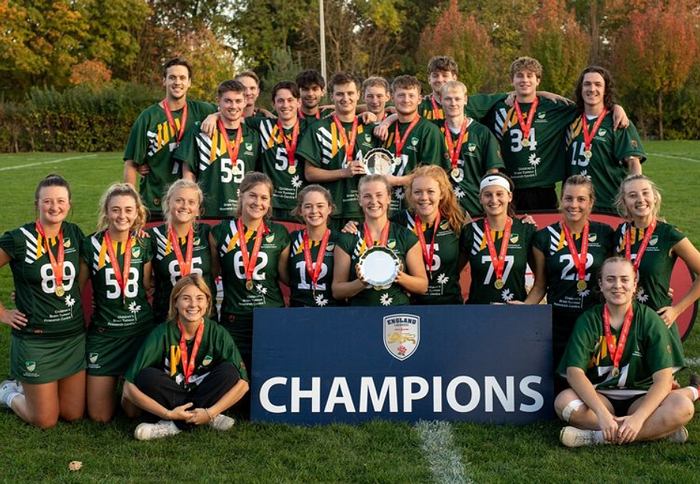 The first UK university cycling event took place in November, as students traveled to Leicestershire to compete in the Hill Championships. Over 500 cyclists from 40 different UK universities raced up Terrace Hill, a course that averaged a 7.5% gradient and featured a 1.1km hill.

Climbing the fastest in the Individual Championships was Matthew Coulson of Oxford and Connie Hayes of Queen St. Mary, who secured the Men’s and Women’s gold medals respectively.

Above: Some shots taken from this year’s Championships (source: BUCS Instagram)

The UK university swimming season got underway in November as the Short Course Championships took over the magnificent Pongs Forge International Sports Center in Sheffield. The state-of-the-art facility houses an Olympic-sized swimming pool and has a seating capacity for 3,000 spectators.

Over 1,500 students competed at this year’s event, representing almost 80 universities from around the UK. Swimmers raced in five different disciplines including Butterfly, Backstroke, Breaststroke, Freestyle, and Medley. Watch highlights of the 2022/23 Short Course Championships below.

After three days of fierce competition, Loughborough University were crowned Overall Champions. The world’s number 1 ranked sports university earned the most medals to retain their crown and continue their dominance of UK university swimming.

See a full list of winners from this year’s Championships here.

The 2022/23 BUCS Individual and Doubles Table Tennis Championships took place at the University of Nottingham’s David Ross Sports Village in November. A record number of 380 students participated in this year’s event, representing 52 universities from all over the UK.

As well as hosting the event, the University of Nottingham also dominated throughout the two day event as they claimed all five Championship titles.

Pictured: Some of the best shots taken from this year’s Championships. (Source: BUCS Flickr)

Pairs from 72 universities entered the 2022/23 BUCS Tennis Doubles Championships in what was the first tennis event of the UK university sporting season. This year’s Championships were held at the Shrewsbury Club in Shropshire and showcased some of the most talented student doubles pairs at the university level.

Camille Townsend and Shura Poppe of Durham University secured the Women’s Doubles Championships as they defeated Freya Davies and Orla Cooper of the University of Bath.

The 2022/23 BUCS Jiu-Jitsu Atemi Championships took place on the final weekend of November at the English Institute of Sport in Sheffield. The state-of-the-art facility, which was hosting for the second year in a row, welcomed over 250 students from 30 different UK universities as they fought for the Individual and Overall Team titles on offer. 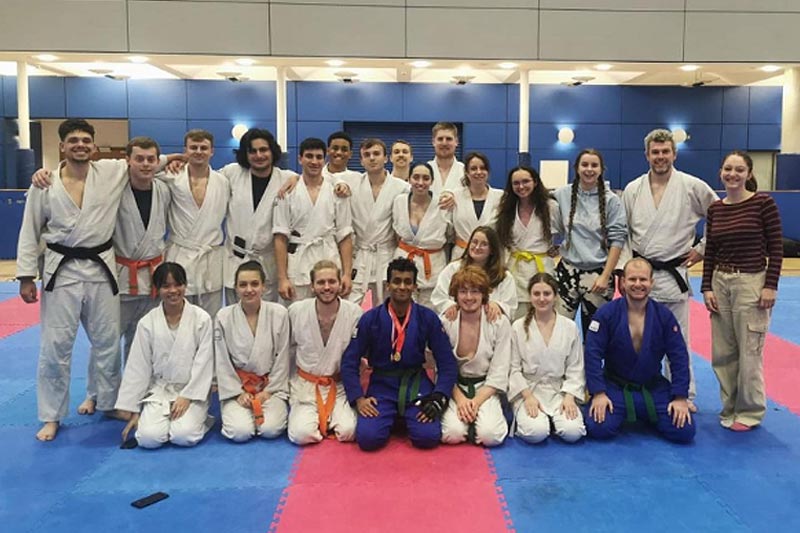 The first of three UK university Taekwondo Championship events took place at the end of November as over 300 students traveled to the David Ross Sports Village in Nottingham. Almost 40 universities were represented at the Autumn Championships, where martial artists competed in five disciplines; Changhon, Freestyle, ITF, WT and Kukkiwon patterns.

Over 30 student-athletes earned gold medals throughout the event, with 22 different UK universities represented on the podiums. 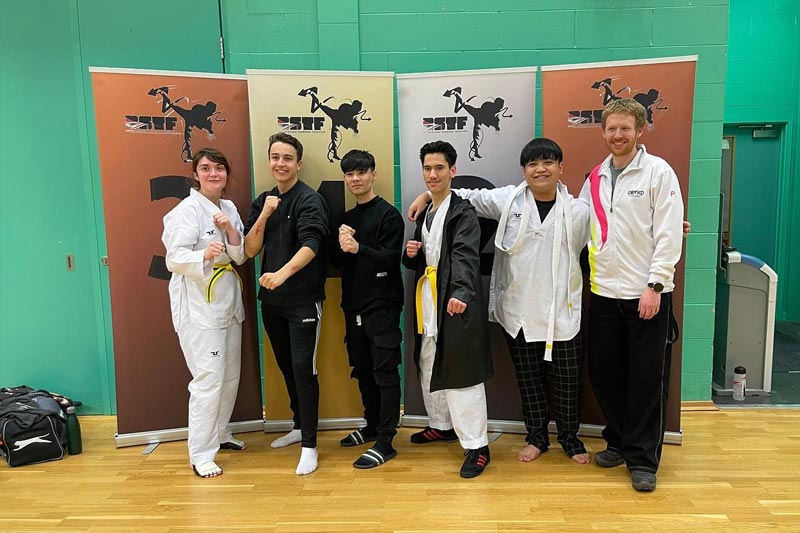 The city of Nottingham also played host to the Individual Squash Championships, where over 500 matches were played during the three-day event. A grand total of 22 students from universities around the UK were crowned national champions after a thrilling weekend of squash.

Over 300 students were divided into 8 different Grades (A-H) based on ability level prior to the start of the competition, with an overall winner being crowned for each Grade at the end of the tournament.

The two standout games of the championships were the hotly-contested Grade A finals, which featured world-ranked student squash players.

As 2022 comes to an end we already look forward in anticipation to the remainder of the UK university sport season.

Follow us across all our social media channels to ensure you stay up to date with the latest UK university sport news in 2023.